As we start our chronicle of our visit to the UK, first few posts will be a little brief. Since our arrival in arrival in England on Sunday Leonie and have been struggling to get over a stomach bug. Without going through all the details, today might be my first chance to eat something normal. Leonie has recovered a little quicker than me, but with the help of the kind people at Solihull Hospital. Our illness meant we had to cancel our first day’s plans, which included Salisbury Cathedral. Even so, we were able to finally get on the road on Tuesday, heading down toward the south west.

Heading toward Cornwall, our first stop was Taunton. We just pulled off the motorway to stop for a while, and we came across this delightful town, complete with a 12th Century castle. 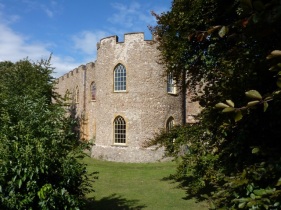 Unfortunately the castle was closed for some renovations, so we were unable the take a tour. I did enjoy a true Cornish Pastie, and after all our dramas it did seem to sit well.

Penzance was our overnight. A cute little B&B called Glencree House. Lonely Planet had described Glencree as ‘budget’ and ‘a bit dated’. That review is a little harsh. Our very roomy apartment was amazing. 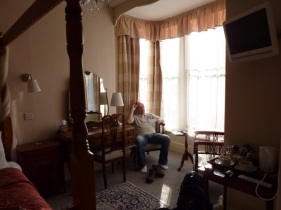 Our room in Glencree House

Full of what Aussies would call ‘antiques’ (the British call these ‘old furniture’). Lindsay and Andrew make fantastic hosts, and Andrew proved a gold mine of local knowledge for the Lands End and Penzance area. 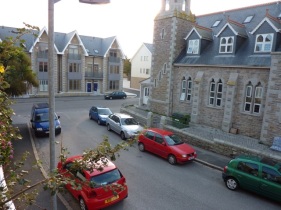 View from our room in Glencree House

We enjoyed a light meal at The Drop Inn, but not all things were good with Dave’s stomach yet. So his next day’s rations consisted of a few spoons of yoghurt, a few berries, some crackers, and a white bun. And a whole lot of Lucozade. Mealwise, it has been a cheap gig thus far.

Just beyond Penzance is a tiny village called Mousehole (pronounced Moushul). This proved to be our introduction to English villages created well before the advent of automobiles. Tiny, windy streets. Stone cottages. Flower boxes. Cobblestones. 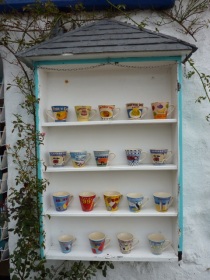 Mousehole harbour consists of a twin arc of stone walls with a tiny entrance for the small boats. The weather when we visited was very pleasant, but looking at the walls, and that tiny harbour, you just knew the Atlantic Ocean wasn’t always that way.